See You Around The Campfire! 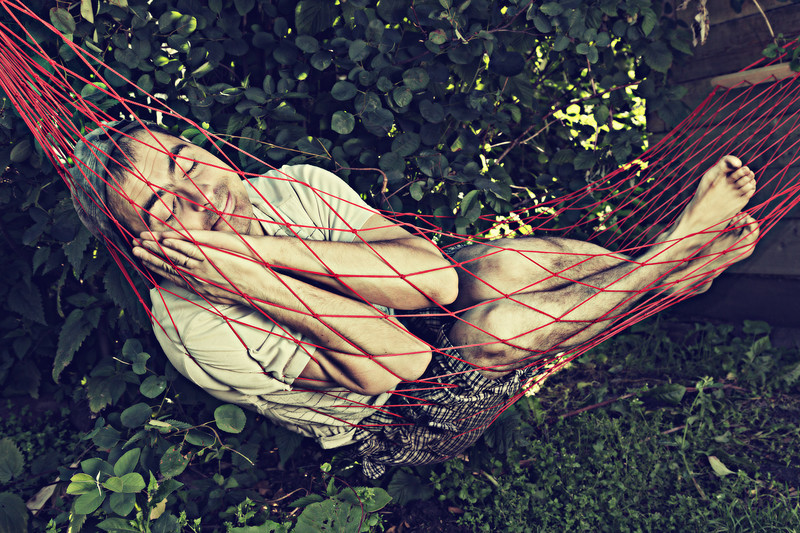 There are few things in life as enjoyable and relaxing as laying in a hammock on a warm, sunny day. Maybe there’s a small breeze rocking you gently; maybe you’re enjoying a good book or drifting off the sleep. Whatever you like to do while relaxing on your hammock, they can be an excellent addition to any backyard or to bring along on a camping trip. In this article, we’ll review a bit of the history of the hammock, how they first became popular in modern times (and what keeps them so popular), and then take a look at some of the best camping hammocks you can buy. 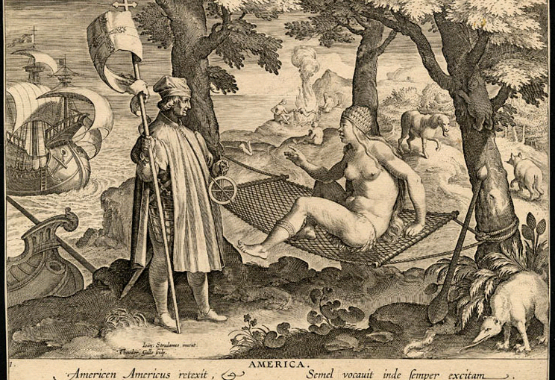 The History Of Hammocks
History of Hammocks First off, let’s take an in-depth look at the history of hammocks. It is believed that the hammock was invented by the Mayan civilization over 1,000 years ago. They sure were prolific inventors! Although the hammock was invented by the Mayans, this is not implicit in the root of the word.
The word “hammock” is derived from an Arawakan word. Arawakan was the language of the Taino people who lived on Caribbean tribes and in northern South America, and the original word was “hamaka.” This developed into the Spanish word “hamaca” and eventually to the English “hammock.” “Hamaka” meant something like “fish net,” and the reason for this is perfectly clear if you look at a hammock.
The first European account of hammocks comes from Christopher Columbus, who noted that the Taino tribes used them for sleeping. This was their original purpose: as beds. They weren’t just used in the Caribbean, however, but also in parts of Mesoamerica and South America. It is theorized that hammocks became so popular among the indigenous people because sleeping in them would provide protection from snakes or biting ants that are native to the region. Columbus brought some hammocks back to Europe, and the sleep of western civilization was never the same!
Around a century and a half after Columbus’s first encounter with the hammock, they were adopted for use in naval vessels. This was definitely a smart innovation: the hammocks saved space in the cramped crew quarters of a ship. In addition, since the hammock would swing with the motion of the ship, sailors wouldn’t get thrown out of them with rough waters or a storm.

Later, in the 19th century, the British started using hammocks for their prison systems. Again, this was due to the space-saving qualities of a hammock, while also providing comfort. It wasn’t until the end of the 19th-century that hammocks became popular in North America. In the 20th-century, they were often used for infants to crawl around on.
These days, around 500,000 to 2,000,000 hammocks are sold in North America every year, and for good reason! It’s incredibly relaxing to take a well-deserved break in one and just let the time pass by. 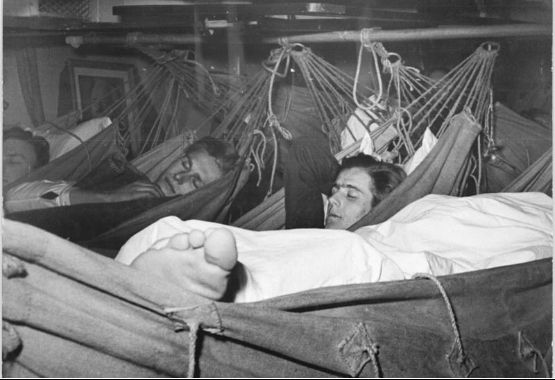 Hammocks In The Modern Era
There are a wide variety of types of hammocks available, including hammocks made specifically for recreational activities like camping and hiking. Many camping hammocks can fit right into your backpack for ease of transportation before you find the perfect spot to set up between two trees, as well as mosquito netting. Ideally, they’re made out of lightweight materials that make them easy to carry around. Some studies have suggested that the gentle rocking motion of a hammock may allow users to fall asleep faster than a typical stationary mattresses. We’ll look at some of the best camping hammocks next. 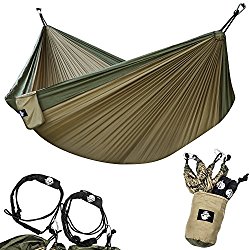 Double Hammock from Legit Camping – First on our list we have the highly-rated Double Hammock from Legit Camping. This hammock is very spacious, as you would expect from a double hammock with room for two occupants. Despite its size, you can easily stuff it into the bag that comes with your purchase making it a very portable hammock. It comes in a variety of colors, as well as a lifetime guarantee! Due to its great features and ease of use, this double hammock is among the top-rated. 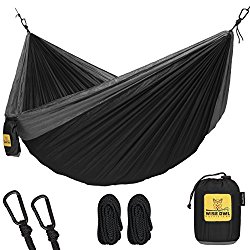 “Ultimate Single and Double Camping Hammock” from Wise Owl Outfitters – If you’re looking for an excellent hammock at a very reasonable price, this hammock is for you. It fits snugly in your backpack for outdoor excursions, making it a very portable hammock, and affordable.
PRICE: $$
RATING: 4.9 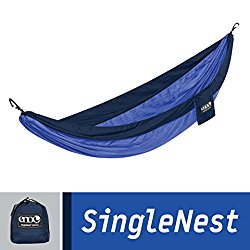 SingleNest Hammock from Eagles Nest Outfitters – This is a very popular hammock, but it’s a bit more pricey than the last one on our list. As the name implies, it’s intended for just one person. It’s very durable, and many hammock aficionados find it to be the most comfortable hammock they’ve ever slept in. It is rated five stars on Amazon.
PRICE: $$$$$
RATING: 4.8 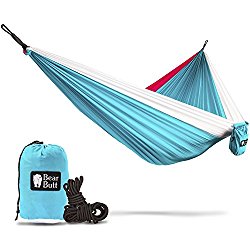 Double Parachute Camping Hammock from Bear Butt – This start-ups name certainly brings a smile to most people’s faces, but all joking aside the folks at Bear Butt know who to build some quality hammocks. They say that their double person backpacking hammocks will hold a large grizzly bear (not that we recommend testing that claim), but non the less they are rated for up to 500 pounds, and have been tested with up to 900 pounds. The hammocks are lightweight, a breeze to setup, and are actually quite value priced.
PRICE: $$$
RATING: 4.8 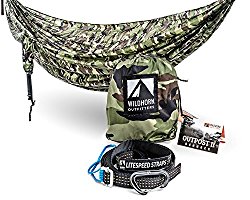 Outpost Camping Hammock made by Wildhorn Outfitters – It’s a very long hammock, measuring in at about 11 feet long! Besides that, it includes straps for hanging (which must often be purchased separately) and a bag for storage – the complete package! In addition, you’ll be able to choose from a variety of colors. This hammock is excellent for the price, and has a very solid level of customer satisfaction.
PRICE: $$$$$ 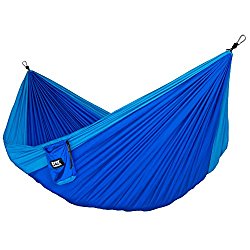 Neolite Trek Camping Hammock from Fox Outfitters – comes in at four and a half stars. It’s very small compared to some other hammocks, but this has the advantage of making it even easier to transport, making it a very portable hammock. Despite its small size, it’s still durable and supports up to 400 lbs. of weight. It comes in a wide variety of colors but is a little more expensive than entry level models.
PRICE: $$$ 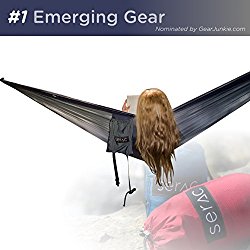 Classic Camping Hammock with Suspension System made by Serac – This it’s pretty fairly priced. Setup is quick and easy, and it comes with its own suspension system and bag, making it stand out from the crowd. Amazon rates it a strong 4 and a half stars.
PRICE: $$$$$
RATING: 4.7 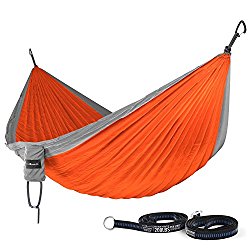 Ultra-Durable Double Camping Hammock from Little River Co. – One of the largest hammocks available on the market, this one is great for two people or one if you really like to sprawl out. This hammock also comes with straps and is relatively cheap for a double hammock – you get a lot of bang for your buck!
PRICE: $$$ 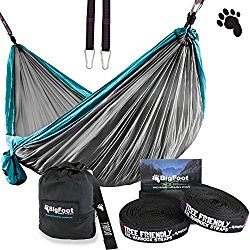 BigFoot Outdoor Tree Friendly Double Nest Camping Hammock – This one is conveniently compact, and fits snugly into your backpack. It also comes with a limited lifetime warranty. The straps, according to the manufacturer, ensure that no trees are damaged by the weight of the person resting in it.
PRICE: $$$$ 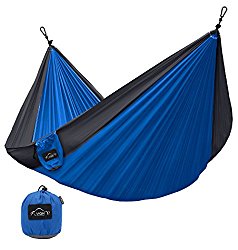 Lamoo Single Camping Hammock from Yak Outfitters – Another excellent hammock, the Lamoo Single comes with tree ropes and is available in four different colors. This hammock is a bit more expensive than other on our list, but past buyers seem genuinely happy with their purchase.
PRICE: $$
RATING: 4.9 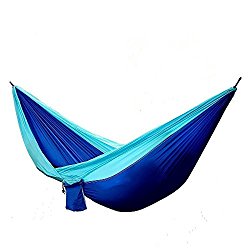 Solefun Portable Parachute Hammock Camping Hammock – This entry level hammock is extremely affordable, but still offers a great amount quality and durability for the price. It’s a very portable hammock, and is conveniently easy to store and carry due to its small size. Keep in mind there’s only enough room for one person.
PRICE: $ 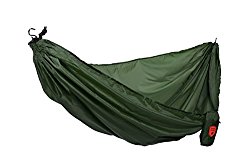 Ultralight Hammock from Grand Trunk – As the name implies, this hammock is very light and easy to transport. Apparently, the carabiners that come with it aren’t that great, but they can be easily replaced with a low cost alternative. The hammock itself is one of the highest rated entry level models.
PRICE: $$